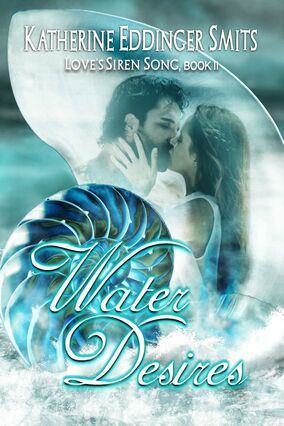 ​When a strange Nerei carries an unconscious and badly injured Bas in from the Aegean Sea, Nik knows she must get him to an island in the Atlantic where a hidden spring of healing water will restore her Nerei (merman) lover.

At the same time, her adoptive father is dying from a boating accident in her home town of Tarpon Springs, and he’s asking for her. While battling a strange illness which antibiotics won’t cure, Nik must figure out a way to save Bas and get home to help her father.

When Bas follows Nik to Florida, he is forced to keep his distance from her.  He has already escaped one death sentence for having a relationship with a human and he can’t risk another one. Still, he’s furious when Nik turns to her old friend, a mage Bas dislikes, to help her unravel the hidden truth behind her father’s accident.

Water Desires is Book II in the Love’s Siren Song Series. The thrilling sequel to the award-winning Water Dreams will drag you under and not let you up for air until the end. If you like mermaids, mages and magical romance, you’ll love this book.
Buy from Amazon
Buy from Foundations
Buy from Amazon UK
The Chambered Nautilus

This is the ship of pearl, which, poets feign,
Sails the unshadowed main, -
The venturous bark that flings
On the sweet summer wind its purpled wings
In gulfs enchanted, where the Siren sings,
And coral reefs lie bare,
Where the cold sea-maids rise to sun their streaming hair.

Its webs of living gauze no more unfurl;
Wrecked is the ship of pearl!
And every chambered cell,
Where its dim dreaming life was wont to dwell,
As the frail tenant shaped his growing shell,
Before thee lies revealed, -
Its irised ceiling rent, its sunless crypt unsealed!

Year after year beheld the silent toil
That spread his lustrous coil;
Still, as the spiral grew,
He left the past year's dwelling for the new,
Stole with soft step its shining archway through,
Built up its idle door,
Stretched in his last-found home, and knew the old no more.

Thanks for the heavenly message brought by thee,
Child of the wandering sea,
Cast from her lap, forlorn!
From thy dead lips a clearer note is born
Than ever Triton blew from wreathed horn
While on mine ear it rings,
Through the deep caves of thought I hear a voice that sings: -

Build thee more stately mansions, O my soul,
As the swift seasons roll!
Leave thy low-vaulted past!
Let each new temple, nobler than the last,
Shut thee from heaven with a dome more vast,
Till thou at length art free,
Leaving thine outgrown shell by life's unresting sea!
​
Powered by